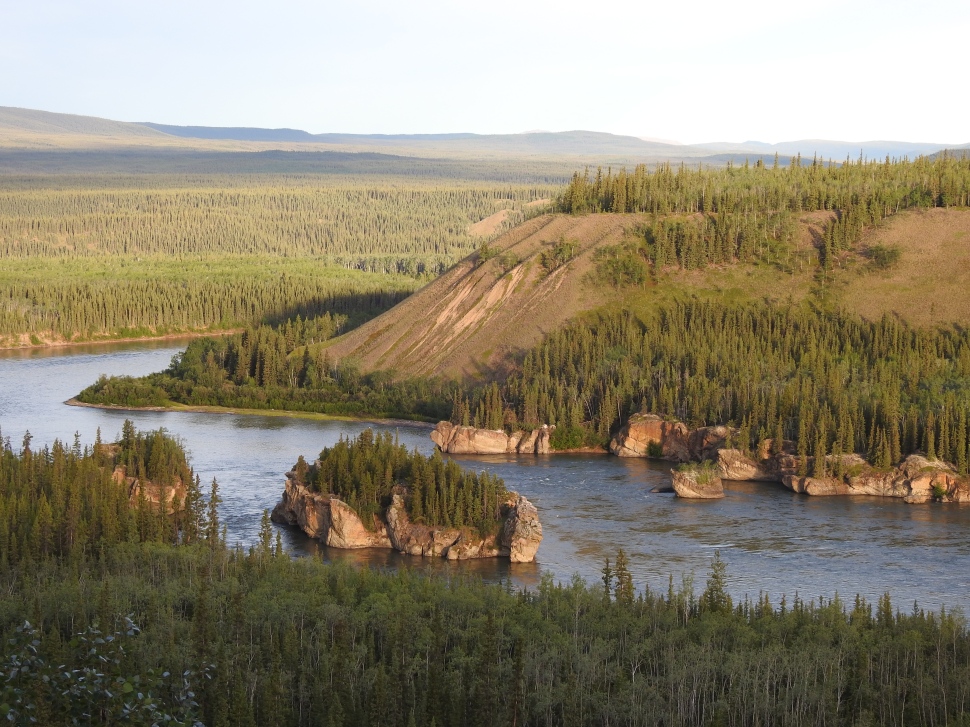 Hello, hope you’re well. I’m going to dive straight back into my Yukon River trip. If you are just finding my blog for the first time, I suggest you go back and read part 1. As well as all my other posts of course, especially Babies & Bear Charges, it’s my favourite.

Anyway, when I last left off, we had arrived in Carmacks, had made our trip to town on bicycles, looking incredibly fit, almost Tour De France like, or something similar at least. We ended up staying 2 nights at the Colemine campground. Firstly, because we had phone service and it was nice to catch up with family and friends, and secondly, because they had burgers and ice cream there. I’m always at my happiest when I have an ice cream in my hand, as you can tell by the picture below. Alas, after two days I knew we had to move on as my trousers were beginning to feel a little tighter and I knew we still had 400km to canoe before reaching our goal. 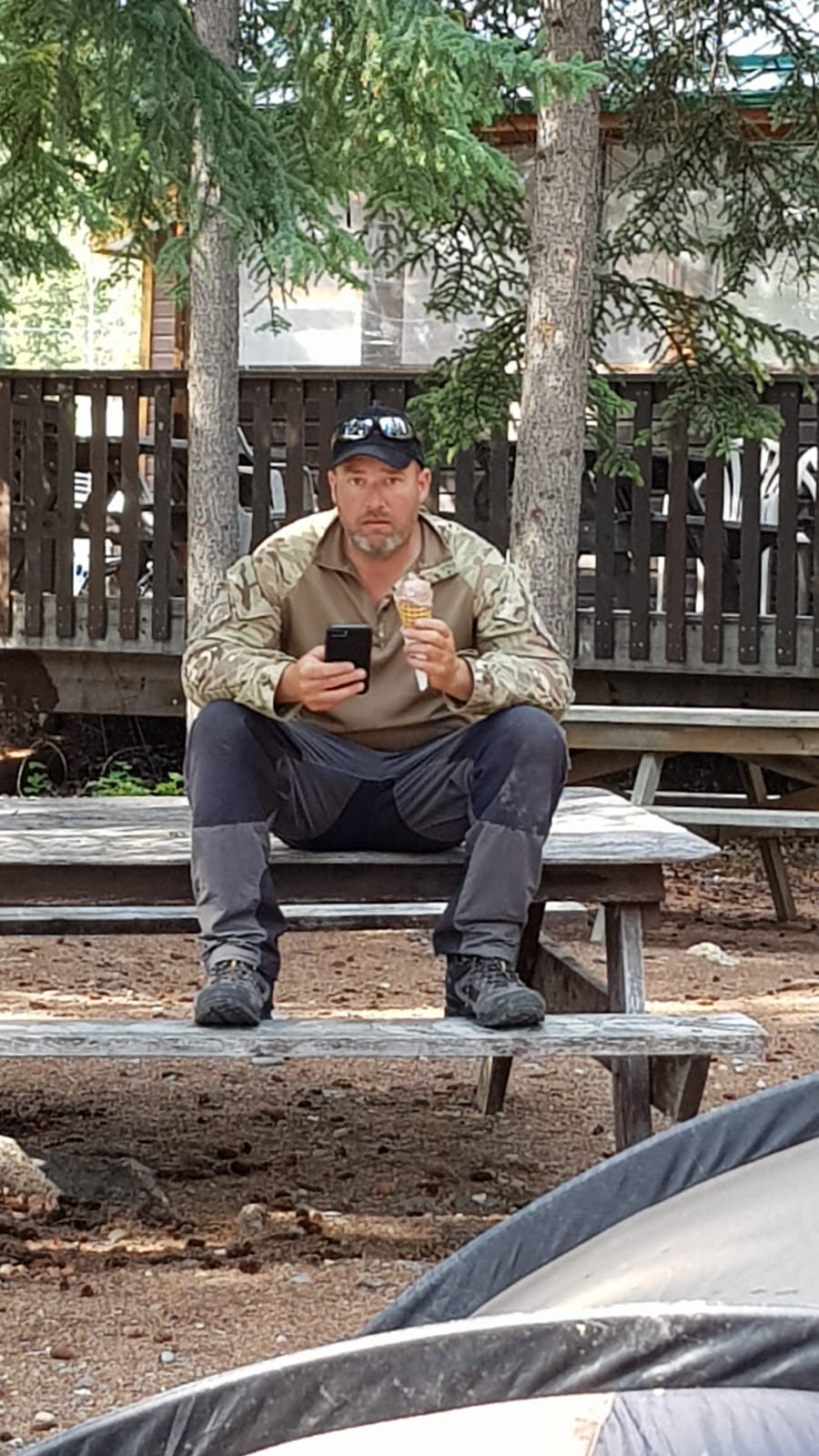 Happy with my ice cream

We left Carmacks on the morning of the 26th June, we packed our canoe, grabbed a final filter coffee and set off in the direction of Dawson City. The first obstacle we would come across would be Five Finger Rapids around 34km from Carmacks. As we gradually made our way down the river, edging ever closer to the rapids, my stress levels started to rise. Since I cracked my sternum, whenever I put myself in stressful situations I always start to get chest pain, and as we got within 2km I felt like I was about to have a heart attack and drop-down dead. This isn’t because the rapids are in anyway what I would class as bad but more because I put myself under so much pressure to get my team/crew through them without incident. They really aren’t that bad, but I had for some reason I built them up in my head to be like a raging water course that would smash our canoe to pieces. Why, I don’t know as it’s not the first time I had gone through them. Be that as it may, I was keen to push through so my pain would ease off. I think I did a reasonably good job of hiding my concerns and we flew through the rapids without incident and without taking any unwanted water onboard, I even managed to strike a stupid pose when Anna turned her camera on me as we exited them. The second we were past Five Fingers my pain passed. Funny how stress affects you. We carried on another 35km that day paddling a total of 70km and eventually getting off the water at 19:30

Striking a stupid pose as we exit Five Finger Rapids

As you get past Carmacks the river landscape changes. It really starts to open up, and there are numerous islands dotted throughout the river with many possible channels you could take. If you don’t take the main one you can quite often run aground in the canoe due to the high volume of gravel bars. We actually only did this once, due to me trying to be clever and attempting a short cut. It did get us to witness a Bald Eagle fishing and I managed to get a picture of it drying off looking like a drowned rat, so not a complete disaster.

The 27th of June saw us arrive at Fort Selkirk. This is an abandoned settlement, only accessible via the river. It is a must see if you ever find yourself out this way. It is preserved and gradually being restored through government funding and is a protected heritage site. There are two churches, a store, an R.C.M.P building, a schoolhouse, a stable, as well as many other small cabins. You can walk through nearly all the buildings where there are still some old possessions left inside them. It’s a really cool experience and feels very ghost town like. We had planned on staying at the campground at Fort Selkirk but there was a sign posted saying there was a mother grizzly with two cubs hanging around the townsite. Being the big brave bunch that we are, we did consider staying for 2 seconds but very quickly thought better of it and found a nice island further downriver. 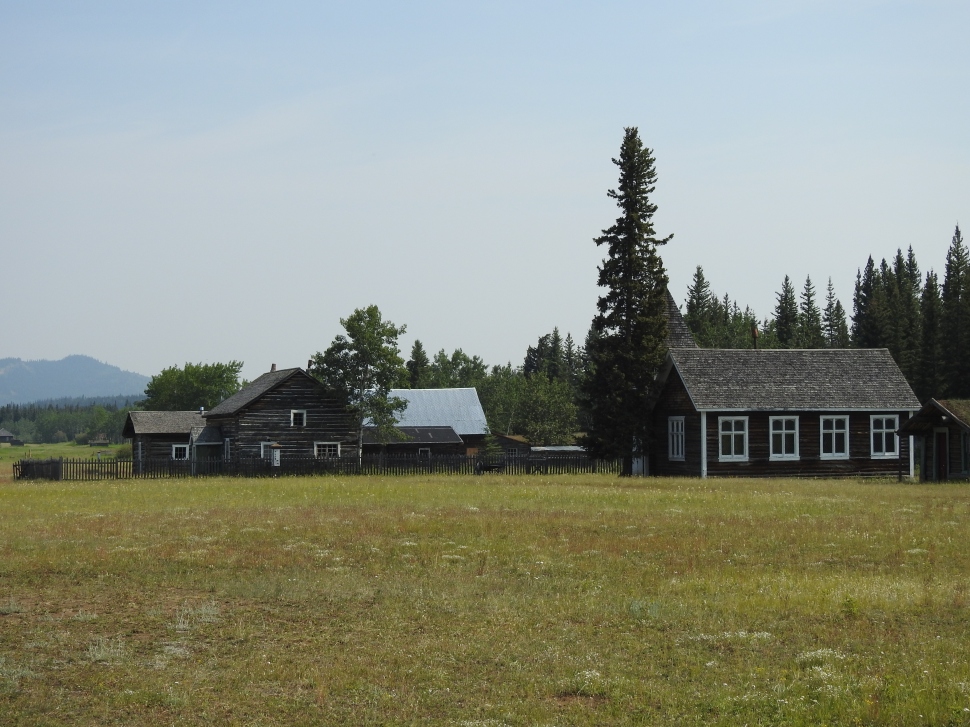 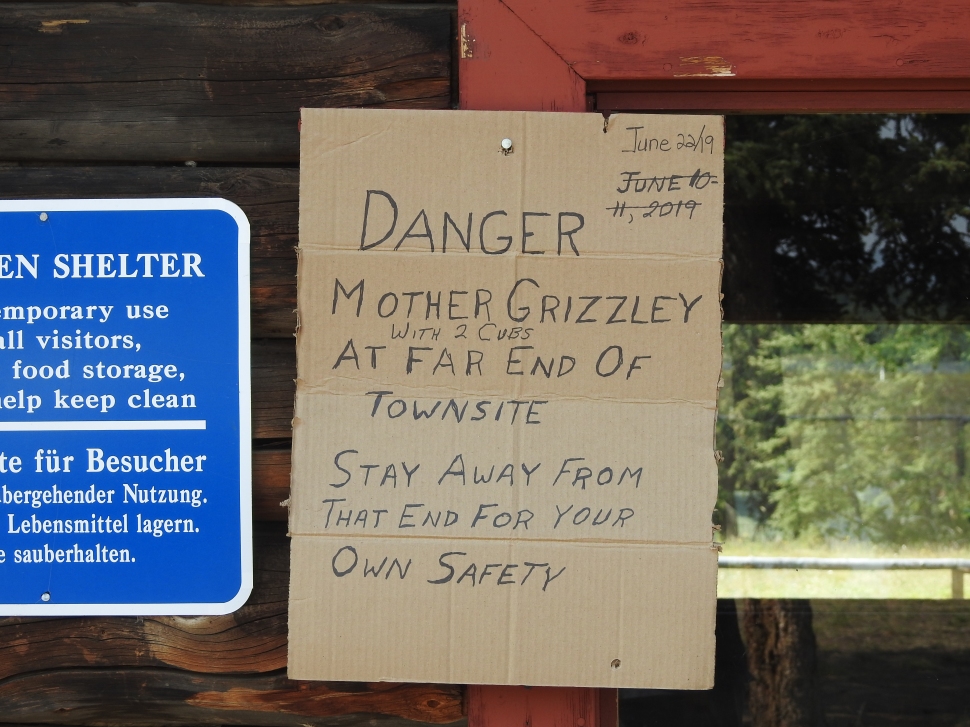 The reason we camped further down river

This newspaper lined one of the cabins walls 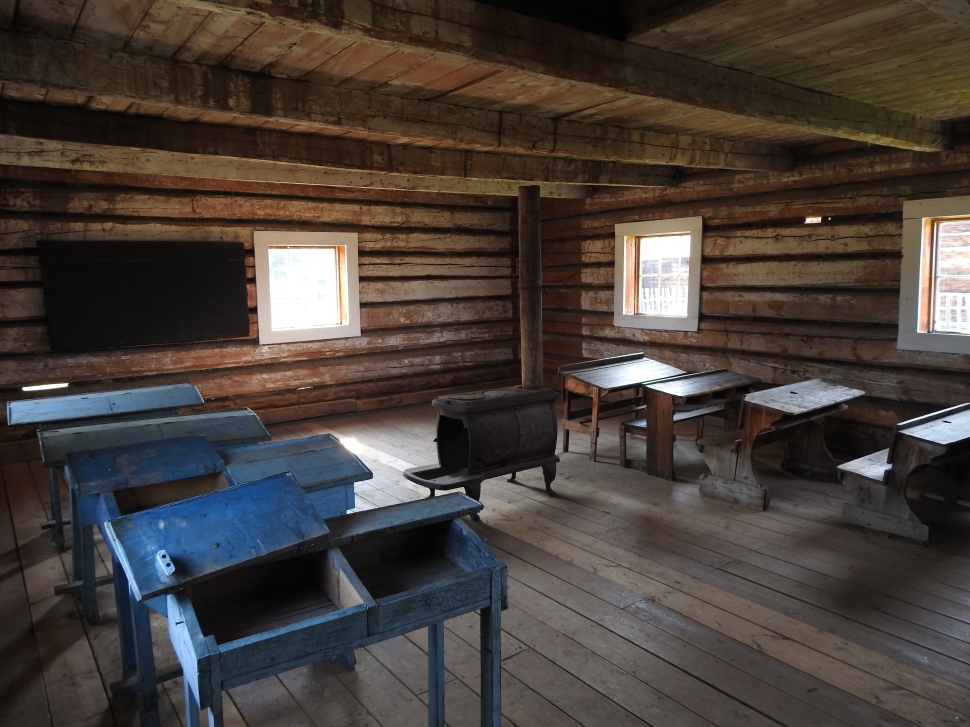 Have you ever heard of the Yukon River Quest? This is a race from Whitehorse to Dawson City, by canoe, kayak or stand up paddle board. I am in utter awe of these competitors. The top athletes will complete this challenge in around 40-44hrs. I think the course record is around 39hrs, which if you have ever paddled over 700km it is mind blowing. I think last place this year was 70hrs, which is an incredible achievement when you think we took 15 days. Anyway, the YRQ had left Whitehorse on Wednesday 26th and at 00:45 Friday morning I was woken from my sleep to the voices of girls chatting away. My first thought was I’d woken up in a coffee shop, as these girls were just chatting away without a care in the world. It took me a few minutes to work out it was the voices of paddlers I could hear. This was at the 484km point and they sounded as if they had just walked up some stairs. Incredible. I eventually got out of bed at around 05.30 and started photographing the competitors. All ages and genders were flying passed and I take my hat off to each and everyone of them. That day we shared the river with many YRQ paddlers and chatted to a few on as they sped past. The stand up paddle board paddlers were the ones that I decided had to be slightly more insane than the rest of the competitors. I mean seriously, who stands up and paddles 715km. Those crazy bastards that’s who. 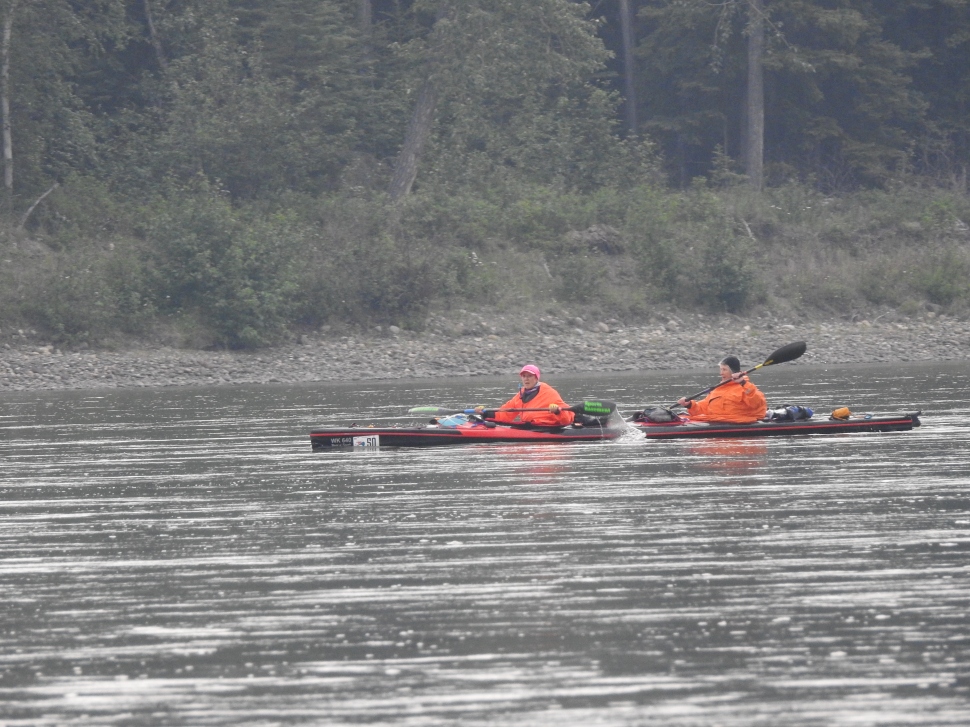 The next few days saw us winding our way past countless islands, notably Dick’s Island. Now, if you haven’t already gathered I do have a childlike sense of humour, much like my two paddling partners, so you can imagine the conversations that went on in the approach to Dick. If you’re too grown up to think of these things, then here goes. So, Dale. Have you ever slept on Dick before? Anna, what’s it like sleeping on Dick? I hope I manage to have a good sleep on Dick. Oh, look, there is the tip of Dick. We’ve just landed on Dick. I found an 8 (see previous post) so I got poo on Dick. I could go on but feel like you get the idea. I actually had the worst nights sleep there and don’t recommend sleeping on Dick if you happen to consider it on your own travels.

Four days later we arrived in Dawson City. We had camped around 5km outside of Dawson the night before so actually got in around 8am. Just in time for coffee. I collected my car, loaded our gear and we sped off for a slap-up breakfast. I can’t begin to tell you how proud I am of both Dale and Anna, but especially Dale due to the fact he had never done anything like this before. What an absolute trouper. He didn’t complain once and just knuckled down and paddled hard. When the going was tough he just got tougher. If you’re reading this your family should be incredibly proud and I for one will gladly wander off into the wilderness with you whenever you want. Anna, you’re a rock on these types of trips. Always looking out for everyone and making sure your team is okay. I hope this is just the start of our adventuring days together. 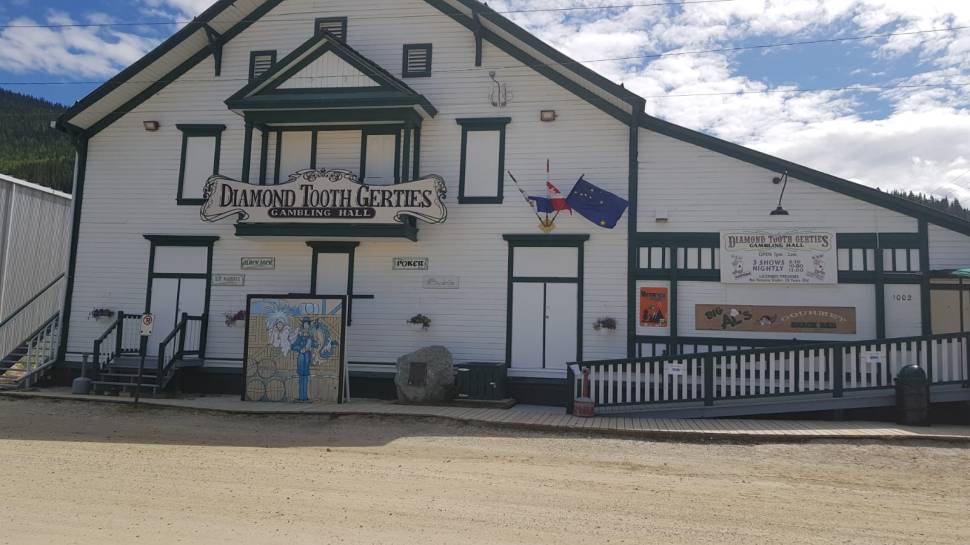 Might have had a few too many in here

We spent 3 days in Dawson City taking in the sights and testing out the drinking establishments. Day one, myself and Dale attempted to drink the hotel bar dry and I awoke the following morning to a hangover from hell. That afternoon Foxy and Sean (see last post) arrived in town with two of there friends and that evening we ended up drinking together till the early hours of the morning. It was a fantastic evening. If you get a chance check out their website and see what they are up to out there.

So, that was that. I drove the 2,290km home the following day and in 23 and a half hours I was back in the cabin with Kaitlyn and the kids. The children’s faces beaming as they spotted me in the morning. Priceless.

If you fancy joining me on another Yukon River trip then drop me a message. I hope to make it a regular event. For now though, it is back to reality, and for the last few weeks I have been collecting firewood and looking after the children. We have 2 Workaways here right now so I am hoping the shed fills up a little quicker. We do have an opening at the end of August due to a couple being unable to make it, so if you fancy coming along and helping around the property then please get in touch. You will be welcome to stay as long as you like.

As always have a great week and I will do my best to update you on the goings on around here really soon. I do tend to update Facebook and Instagram more regularly so if you don’t already then please give them a follow. Speak soon.

Donate to Our Cabin Life

By donating to Our Cabin Life you are helping us grow our business, and eventually open some guest cabins. It also helps cover the costs of running our website

View all posts by ourcabinlife11 →

This site uses Akismet to reduce spam. Learn how your comment data is processed.